fougasse & focaccia all at once

Yesterday quite late evening I got an email from a good friend who lives in Rotterdam. In the email she told me that her husband liked the fougasse bread she made that he bought her bacon so that she would make it again soon for him. That fougasse bread she made somewhere last week was the first time ever bread she has ever made. I helped her a bit with the technic of bread kneading and making. She found it great fun. And it was a hit! A success! I am happy for her. In the email she also told me that she would make another attempt of her own (without my help, of course) to make fougasse bread. I felt excited for her.. :) And in fact, she has given me spirit to make fougasse bread myself here at my home.

But the weather is good and warm. And since yesterday I had planned to put my 2 chayote  plants outside. They had been growing in the pot indoor and that was not nice for them for chayote is a climbing plant. But the weather was not good yet. Still very cold. It would not be good either for chayote for the it is basically a tropical plant. So it really needs serious warm temperature to grow properly. Too cold weather will harm and damage it. Two hours ago I finally put those chayote plants in the soil right in front of my small barn. There is even a wooden climbing rack on the outside barn wall so that the chayote plants may take grip and climb properly as they grow further. After being done with the chayotes I loosened the soil on the right line of my back garden. I will need them soon ready to grow some varieties of vegetables. Then I was done completely for today with the back garden. 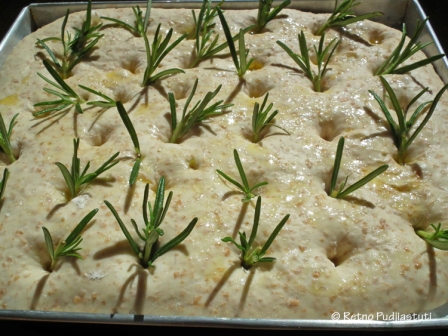 I got back into the house, washed my hands properly and then I started to prepare all the things I needed to make a fougasse. This time I mixed the white strong flour with the whole-wheat one…half-half. The mixing and the kneading were done finally. I put the dough in a big bowl smeared with some olive oil and covered it with a damp kitchen towel. I am keeping it aside to give the dough one good hour to rise. From one full recipe I can make 2 big fougasse breads. Instead, I will make just one fougasse bread with sliced tomatoes, pieces of snijworst (Engl.: sliced sausage) and pieces of camembert cheese. I drool already!

I will make focaccia bread with coarse salt and fresh rosemary out of the other half of dough. It’s been a loooong time since the last time I made focaccia. Hhmmm… I love eating focaccia bread. It’s easy to make, simple but so tasty. Of course I will make garlic-olive oil dip, too.

Ueehhmmm… finally I changed my mind from making the one part of my bread dough a  fougasse bread to making it to another shape. It’s just the matter of shape. But it still tasted so yummy. You should try it once, too!

And here is my focaccia bread, before and after baking. The look of it pre-baking reminds me of the song “Green Green Grass of Home” :)

And here is the pic of some sprigs of rosemary and a teaspoonful of coarse sea salt that I used for the focaccia.